We Happy Few is an interesting game developed by Compulsion Games. It is a work in progress that is been worked on and to be released mid-2018. The trailer of the game is actually what is making a lot of persons search about the game. From what people have seen already, the game is pretty amazing and folks just keep on anticipating the release of the game. We Happy Few is being published by Gearbox Publishing and was designed by an intelligent guy by name ‘David. It was written by Alex Epstein and Composed by Nicolas Marquis. As people anticipate its release, they have been made aware that the game is going to be first released on these platforms;

These are just starter for the game. So if you are using a PC, you are about to have a time of your life. For Android and IOS users, don’t get disappointed so fast. Just get hopeful that with time this game will be available to you and these goes to users of other platforms. 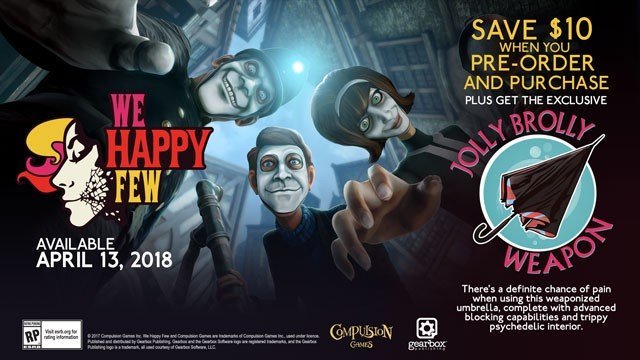 About We Happy Few Game

We Happy Few is a single-player Survival horror game. For me, I don’t see a lot of interesting horror games because if you are a lover of movies, you will know what a horror movie is about. We Happy Few joking fits the name of this game if you’ve seen a tip of this game. The game is an indie survival game with a lot of explorations. Also, it is a fiction game that takes place in the English city of Wellington in the 1960s. The city has several events ongoing in it with drug activities and even part of the World War II.

The game begins with a set of speeches from which players can select the character of their chose. Exploration of the city’s environment is vital as it helps you as the player know more about the city. At the start of We Happy Few, players are assigned to just one area of the environment but as they get along, more districts are open to them. However, players must go through several tasks which they have to complete in other for them to win the game. To survive, players then need to be in sync with their surrounding environment by acquiring items which include; weapons, sustenance etc.

They do this by going into buildings and homes. As you play, you have a map to always direct you to places to go for the accomplishment of your task. It is a survival game so fighting isn’t optional at all. I so much love the real-life scene because the player will have to eat, drink and rest in other for them to survival and be active. It’s all but survival.

Check out the Trailer for the game here